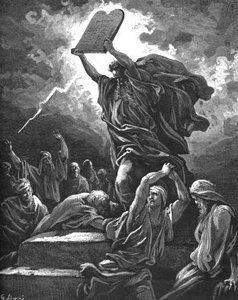 This project started almost three years ago after I discovered that there was no oratorio that focused specifically on the life of Moses. There was the atonal opera “Moses and Aaron” by Schoenberg and the oratorio “Israel in Egypt” by Handel, but that work focused on the story of the Israelites from the arrival of Joseph in Egypt until their exit under Moses. So I decided to do the piece, started to raise funds for it and got to work.

I decided to use the Hebrew text because it is the original text and I found that it inspired me more than any translation. I also decided to use a very accesible musical language because I wanted this to be a work not only for a professional choir but for smaller synagogue and church choirs that may want to perform it. I decided that the voice of God was going to be performed by the full choir while the narrative passages were going to be performed by two voices instead of the four voices, (soprano, alto, tenor , bass) of the full choir. I also gave the orchestra the most challenging harmonies so that the music could be more modern without giving the choir and the choral conductor Vicodin headaches.

The San Fernando Valley Master Chorale named me their composer in residence as they intended to perform the project and I started bringing sections of the work to Terry Danne for rehearsal. The plan was to premiere the piece in May of 2015 but in Oct 2014 I had written less than half of the work so the choir decided to  do a preview instead and wait for the next year to do the full work. 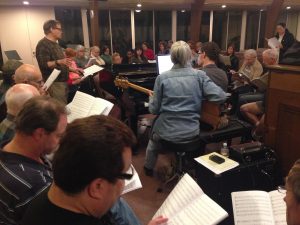 Rehearsing with the San Fernando Valley Master Chorale in Feb of 2015.

And so it was that on the 9th of May of 2015 the San Fernando Valley Master Chorale (SFVMC)  gave an 18 minute preview of the work, with excerpts from sections that spanned from Israel Pleads to God for Redemption, before Moses birth,  to The Song of the Sea, after the Israelites crossed the Sea of Reeds and the Egyptian army drowned. 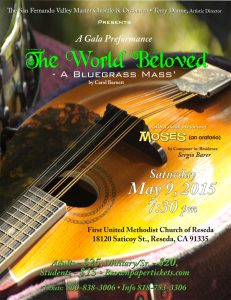 The work was sung with only piano accompaniment.Here you can see the performance of The Song of the Sea by Lindsay Patterson in concert.

After May I continued working on the piece but in October 2015, Maestro Terry Danne decided to retire so the premiere of the work was put on hold. It still took me another 6 months to arrive at the end of the piece, which I finished in May of 2016.  Fortunately the SFVMC found a new Artistic Director in Charlie Kim and in October gave a fabulous recital of works a cappella. After hearing this new incarnation of the chorale I talked with Charlie Kim  and we decided to go ahead with the premiere before Passover of 2017. The rehearsals started in January of 2017 and now here we are, ready to go! Here are some pictures of the dress rehearsal. 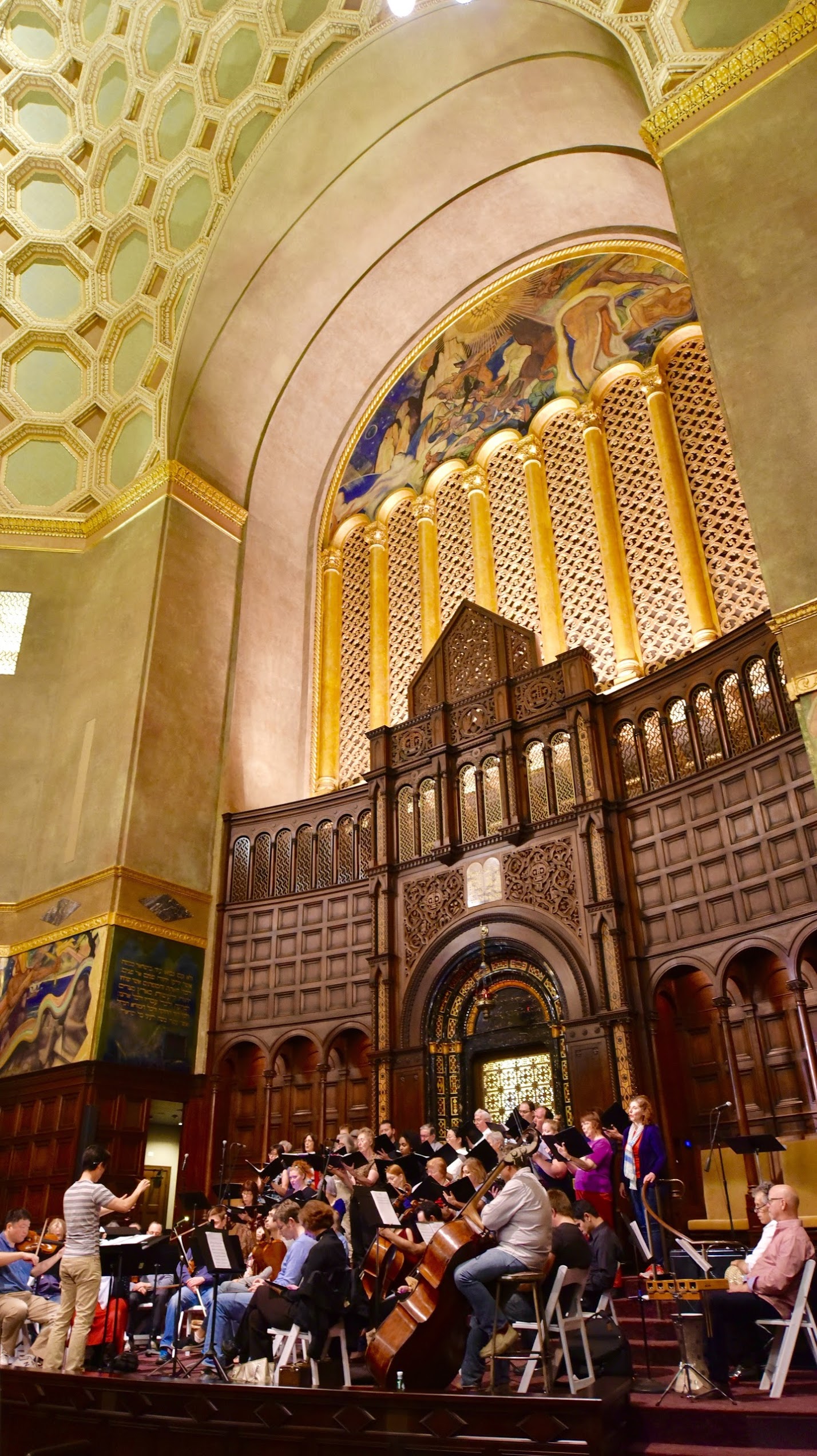 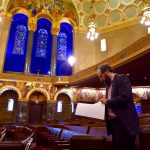 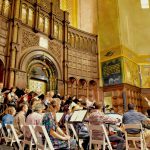 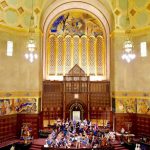 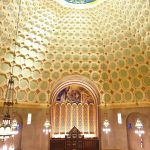 And then there was the premiere. First, a reception catered by Alligator Pear and attended by the donors to this project. 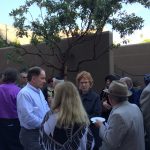 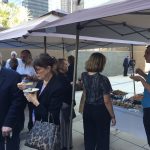 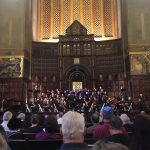 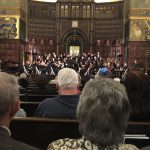 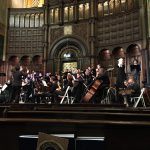 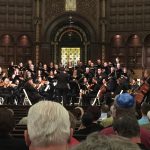 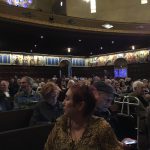 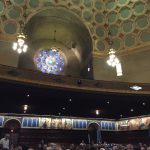 and then the bows and the celebration at the end: 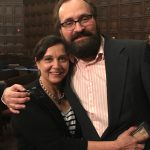 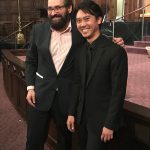 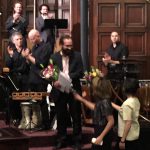 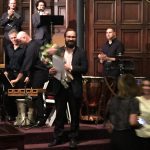 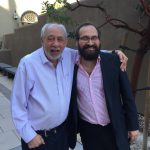 Look for more performances of this work in the future. The story doesn’t end here. It just continues.You can watch a highlight reel of Moses in YouTube that lasts 10 minutes and has subtitles or watch the complete performance, which lasts an hour and a half.

The video is here!

On April 2nd, 2017, Moses, An Oratorio, was premiered. You can take a look at the page and see pictures and information of what happened. Wilshire Boulevard Temple has a great sound cabin and the performance was recorded, so now we have the performance available in a several formats. One is a Highlight Reel that lasts 10 minutes. Here are some emails I got after the performance and why I think it is worthy of sharing: Sergio – Congratulations. Everything — the music, the script, the performers — was wonderful. My wife and I enjoyed it thoroughly. It was an honor to have had a small role in it. Sincerely, N.L. Dear Sergio: I wanted to say mazel tov for a wonderful program today. I’m sorry I did not find you at the end to congratulate you in person. It is tremendous that you wrote this work in the way you wanted to do it and got it performed. It was beautiful, wonderful and moving. I wish you only continued success. MK. HELLO SERGIO… I WAS AT THE TEMPLE YESTERDAY TO HEAR YOUR BEAUTIFUL ORATORIO. THE MUSIC WAS JUST LOVELY, I LOVED THE ORCHESTRATION WITH THE DEMBEKS (sic) AND THE SINGING WAS EXCELLENT. ESPECIALLY MARCUS FELDMAN. CHORUS WAS VERY GOOD. THIS IS TRULY A BEAUTIFUL PIECE AND I HOPE TO HEAR IT AGAIN…I WOULD GO TOMORROW IF IT WERE BEING PERFORMED AGAIN! THANK YOU FOR A BEAUTIFUL AFTERNOON. MOST SINCERELY, R.A.
Highlight Reel