Hello! Welcome to my website.  Right now I am doing a premiere, by video, of my work Scenes of their Childhood. This is a work of 11 miniatures for piano about my daughters Libe and Ariela growing up in the first decade of the millenium.  You will see the titles of the 11 sections listed underneath. As the names turn blue,  you will be able to hear the pieces by clicking on them. The 11 pieces take a total of 13 minutes. Each piece is between 1-1:30 minutes long.

I hope you enjoy them:

And now, to hear the whole work, you can just go to this link:

Scenes of their Childhood.

All my videos are there.

Continue scrolling to learn my story! 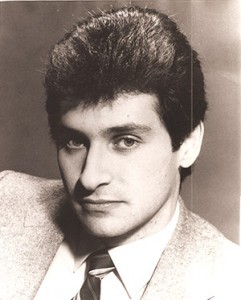 I started to learn the piano when I was six. I am still working at it. Hard.

My mother was an amateur pianist and she was my first exposure to the instrument. My mom’s family was musical, she had 2 sisters and the three of them played. I was given piano lessons, but I was lucky, because 20 years earlier my cousin Bush was not allowed to study piano due to it being”a lady’s pursuit” and “improper for a boy”.

My first teachers of note were Marcia Freyre and Marcia Freyre de Andrade, two exiled Cuban pianists who used to teach a few blocks from my home in Mexico City. I didn’t practice very hard when I was younger, but I kept making progress, so my teachers encouraged me on. I won a silver medal as a teen in the Estudio Internacional de Arte. 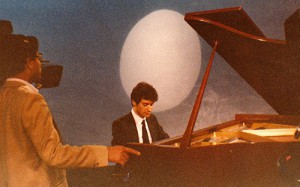 On the set of Estudio54

I met Mario Feninger when he came to play in Mexico City and later, when I heard him play in Los Angeles, California. It was after hearing him play The Pathetique Sonata of Beethoven and the Minute Waltz of Chopin, that I decided to become a concert pianist

In 1981 I moved to Los Angeles to study with Mario and his partner, Ian Brooks. I spent four years working with them until I started appearing in concert in Mexico City. From 1985 to 1988 I appeared in recital in different venues and I also appeared on TV repeatedly, in a TV Show called “Estudio 54”.

However, in 1988, before leaving for a tour in South America, something happened. I was practicing the 6th Hungarian Rhapsody of Liszt, I did a jump with my left hand, falling hard on my left pinky to get the bass note out and I felt a searing pain on the outside of my left wrist. I had injured my left hand. 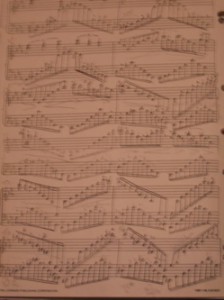 A page from the manuscript for the etude “The Arpeggio”. Below, A page from “For the Left Hand”.

I started to compose in 1995. All of a sudden, my ability to conceive music and to think in terms of music opened up. This caught me by surprise. I had studied the fundamentals of composition earlier with Mario Feninger, as part of my training as a pianist and musician, without any particularly notable results. I could write music, laboriously. It was hard work, not particularly pleasurable.

But one day, it happened.

For the first time, I was able to hear musical phrases forming in my head, and as I was writing them down, more phrases formed. The first works I composed were studies, which I used to improve my piano technique. But they are concert studies, pieces which are interesting enough to perform in public.

My idea at the time was to help my piano carreer with my pieces, to give myself a chance to stand out among other pianists by playing my own works.Many pianists had written pieces for themselves, including Sergei Prokofieff, Sergei Rachmaninoff, Anton Rubinstein, Ferruccio Bussoni and, of course, earlier musicians who, for the most part, performed only their own music, like Beethoven, Mozart, Bach, etc. 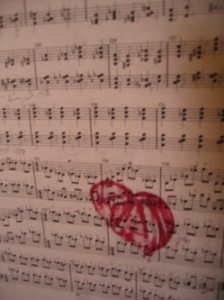 My daughter Ariela likes to draw on the back of some of my music. Here is a couple she drew for me.

But I also decided to try and develop a musical style of my own and to see how far I could take this new ability before bringing my music to the public. My efforts went in several directions. After the first etudes I decided to write pieces inspired by ideas I wanted to express. I created about five suites and sonatas on different subjects, adding a short poem before each piece. I wrote about the media, about emotions, about the environment, about society in general, about children.In addition, I undertook the creation of a musical form.

This form I called “evolution” which is discussed in the page Works. I started to get into chamber music, vocal music, choral music, and orchestral music. After a period of 8 years of writing music, in 2003 I decided to embark on my first public project as a composer/pianist by creating a CD called Almost Songs. I learned the pieces and recorded them in 2005, releasing the CD with a concert at Zipper Hall of the Colburn School of Music in Los Angeles, California. 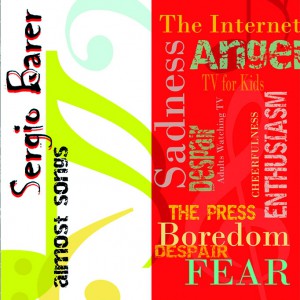 It took me about a year and a half to prepare this recording. I had neglected the piano in order to compose during the past few years and the piano wasn’t happy with me, so it demanded a lot of attention in order to play well for me.

The recording was done in July of 2006 in Zipper Hall of the Colburn School of Music in LA. The CD came out in October of that same year with a recital in that same hall. It was very well received by the audience and got a nice review.  “Almost Songs” is so called because each piece or movement is preceded by a short poem, which adds a little meaning to the work. So it is almost a song because it has “lyrics” and music but they are not played at the same time. The CD contains two works: Moods, which consists of 9 short pieces: Sadness, Despair, Fear, Anger, Hostility, Boredom, Seriousness, Cheerfulness and Enthusiasm.

And The Media Sonata, which has 4 movements: The Press, The Internet, Adults Watching TV and TV for Children. I’m uploading the pieces to YouTube and there will be links added to each piece as it becomes available. The first one that went up was The Press. I hope to have all of them up shortly. My story continues below. 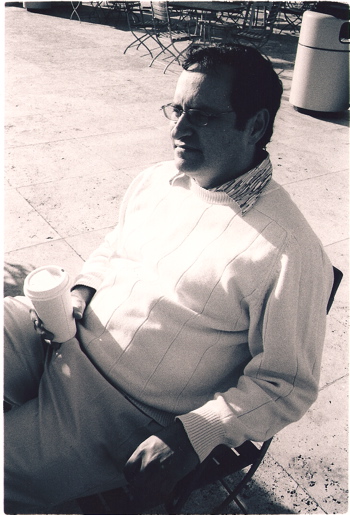 (2019) I am now involved in several projects. The big one is called The Nightmare and the Dream, which is an oratorio for choir, brass ensemble and soloists which takes us from the persecution of Jews in Europe in the Middle Ages through the emergence of Theodore Herzl as a visionary intent on creating a Jewish State, through his works describing such a state and his activities to bring about its actual existance, to the settlers and the Declaration of Independence of the State of Israel.

I also just finished writing two choral pieces based on poems of  the Aztec king Netzahualcoyotl with some Aztec colors. And last December  my first work for children’s choir called “Who is Judah Maccabee?” was premiered, as well as “Quita’l Tas”, (Remove the Tray), a Hanukkah song written for choir a capella, two voices, men and women and in October my work  for mixed choir a capella “Isaiah Said” was also premiered.  Lastly, I did an arrangement of a choral piece by Dr. Diane White-Clayton, “Clap Praise”,  adding strings to a piece written for choir with piano accompaniment.

This was a new experience for me, which demanded that instead of getting into my head to dig deeply into my own ideas, I get into another composer’s head, look into his ideas and then help them come out in a more beautiful way through a bigger ensemble of instruments. I will probably continue doing this in the future, parallel to my writing my own new works, as I found it creative and musically satisfying.

It is now Summer of 2022. There were several premieres of new works in the Spring.  A Song and a Prayer, based on some texts about music in prayer by Rabbi Abraham Joshua Heschel and commissioned by Whittier College was premiered in May 12 and then performed again in 2 concerts on May 14 & 16.  Then on June 5th there was the premiere of Ode to Music by the San Fernando Valley Master Chorale. And there was a preview of my work Prayer and Praise, which forms part of a work about Rabbi Abraham  Joshua Heschel being done by the Helfman Composers Group, to which I belong, on June 4th.

And I just finished recording and doing videos for the 11 miniatures that form the work Scenes of their Childhood! This was my first recording in a long time as I have been more involved in composing than in performing, but it helped me get back into the habit of practicing and performing for others. The videos are listed on the welcome page and will be there for this season. I am also looking to collaborate with video artists to do some interesting renditions of the same works.

My work The Nightmare and the Dream, a full oratorio about Herzl and the creation of Israel, will be premiered probably at the beginning of the Winter of 2023. It was postponed for logistic reasons but even the rehearsal version with piano accompaniment  is finished now. Rehearsals will start in August, and we did a sung video previewing the last movement of the work called “The Pioneers”. You can contact me if you want to hear it.

I have continued with my podcast “Let’s Talk About Music”, an informal conversation I hold mostly with other composers, about music. It is not so much a biographical interview but a musical exploration of a couple of works  of the composer in which we exchange opinions and ideas, always in good cheer. Click on their names to hear the podcasts with composers Dale Trumbore and Zanaida Robles.