This was an interesting time of my life. I was frustrated because I couldn’t play the standard repertoire, but I found that there were quite a few pieces written for one hand only. I played Britten’s Diversions for One Hand and Orchestra with the orchestra of the Instituto Politecnico Nacional. 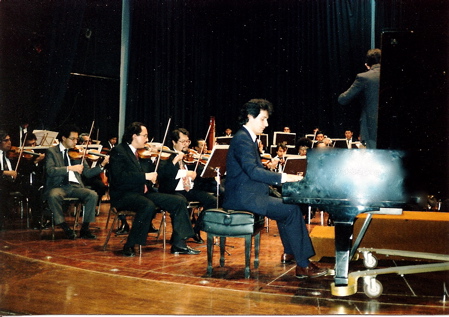 I also did recitals with one hand and had an appearance live on national TV with Guillermo Ochoa, on channel 2 in Mexico, where I played “A Revel” of Frank Bridge.

The technical demands for an artist are immense, as you have to make one hand sound like two. Many pieces were written for the left hand, but I played them with the right. That adds a bit of awkwardness to the playing, as the thumb is on the opposite side of the hand, but it’s not insurmountable.

A Mexican composer, Enrique Santos, wrote a piece for me, and so did the American composer Michael Webster. I found pieces by Scriabin, Saint-Saenz, and other less known luminaries, all very effective.

But I was still looking to recover the use of my left hand. Mario Feninger heard about a teacher that was helping injured pianist regain the use of their hands. He called her, asked her if I could be helped and sent me to Amherst, to a two week master class given by Ms Dorothy Taubman.

In a bad economy, there are still brave people that believe in the arts and their vital role in society and are willing to invest in elevating society to a higher plane through new works.

Review of “Piano Music for One Hand”

"If you simply like bright, melodic piano music, I can recommend this disc highly to you"